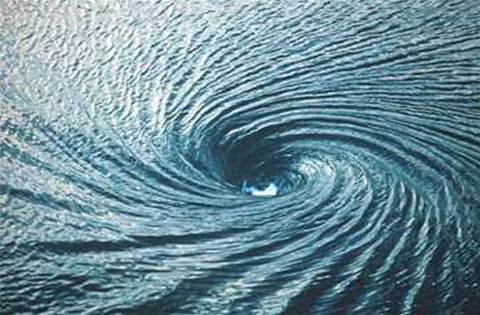 Both vorticity and circulation are associated with rotation in a fluid. So let’s first understand how rotation phenomena occur in a fluid?

You can find these derivations in any textbooks of Fluid Dynamics. We can now express the rotational vector  as follows:

If you notice this equation properly, the term at the right hand side is actually half of the curl of the velocity field.

The curl of the velocity field is the vector quantity which is equal to twice of the angular velocity. That vector quantity is the vorticity that gives us the measure of local rotation of the fluid element.

Circulation is another measure of fluid rotation.

If we consider a closed path c around the fluid flow then circulation is defined as the line integral of the tangential velocity around c.

By applying the Stoke’s theorem, circulation can be related to the vorticity as;

This shows that the circulation actually is the surface integral of the all the vorticities of an area bounded by the curve c. In other words, circulation is the flux of vorticity. And conversely, vorticity at a point can be considered as the circulation per unit area.

Physical significance of vorticity and circulation:

Circulation can be actually thought as the ‘push’ that can be felt while moving along a closed path or boundary. For example, take a water in a bucket or tank and then stir it so that the flow becomes like that of a whirlpool. Now, if you keep any object in that flow, the object will experience the push and that is circulation. If we gather all the circulation in an area and calculate it around a single point, it is called Vorticity. (Circulation / area)

In the same whirlpool you created in the bucket, you can try placing a paper boat and then observe the motion. Sometimes, the boat might not rotate but revolve around the center. In this case, the vorticity at that radial distance is zero. However, we cannot say that the circulation of water inside the bucket is zero. You can try placing the paper boat at the center and find it rotating. Even though there is zero vorticity at other points, there is some finite vorticity at the center and that contributes to the circulation. This gives you idea that circulation is the global measure of rotation.

Also check out this Wikipedia link for more insight on circulation and vorticity https://en.wikipedia.org/wiki/Circulation_(fluid_dynamics)