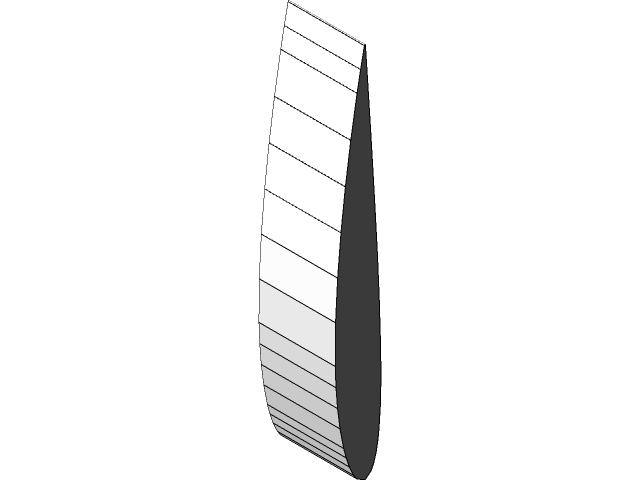 Are you interested in learning about aircraft and aerodynamics ? If yes, I am quite sure you have encountered with terms like NACA 2412, NACA 0012 airfoils.  What are NACA airfoils? What do those 4-digit numbers signify? If you want to know the answers to these questions, this post is for you.

What are NACA airfoils?

The NACA airfoils are airfoil shapes for aircraft wings developed by the National Advisory Committee for Aeronautics (NACA). The shape of the NACA airfoils is described using a series of digits following the word “NACA”. The parameters in the numerical code can be entered into some analytical equations to precisely generate the cross-section of the airfoil and calculate its properties. In the early periods of aircraft developments, aircraft designers used to design the shape of airfoil randomly based on intuition or some experiments.

Also check out this post to see how an aircraft wing is manufactured https://www.geniuserc.com/how-are-aircraft-wings-manufactured-brief/

During the late 1920s and into the 1930s, the NACA developed a series of thoroughly tested airfoils and devised a numerical designation for every airfoil — a four-digit number that represented the airfoil section’s critical geometric properties. By 1929, Langley had developed this technique to the point where the numbering system was complemented by an airfoil cross-section, and therefore the complete catalog of 78 airfoils appeared in the NACA’s annual report for 1933.

Engineers could quickly see the peculiarities of each airfoil shape, and the numerical designator (“NACA 2415,” for instance) specified camber lines, maximum thickness, and special nose features. These figures and shapes transmitted the type of data to engineers that allowed them to pick specific airfoils for desired performance or aerodynamics characteristics of specific aircraft.

Before learning about the nomenclature of the NACA 4-digit airfoil let’s learn about some basic airfoil terminologies.

The four digits of NACA 4-digit airfoil indicates the following;

How can we generate the airfoil shape after knowing the 4 digits?

You can skip this part if you hate mathematical equations. In a 4-digit airfoil, the co-ordinates of airfoil shape depend on two things; mean camber line and airfoil thickness. The maximum camber(m), position of maximum camber(p) and maximum thickness(t) for a given chord length ‘c’ can be easily determined from the 4-digit figure. Then the mean camber line of the airfoil can be represented by an analytical equation as follows;

Using this equation, we can easily draw the mean camber line. Mean camber line divides the airfoil into two equal parts. Therefore, adding the thickness term will yield the overall airfoil. The thickness distribution of NACA 4-digit airfoil series is given by another analytical equation as;

The value of y_t obtained from the above equation is half of the thickness of airfoil at corresponding value of x.

Due to this reason, we must take the angle of camber into account which is given by;

Finally, the co-ordinates of upper and lower section of the airfoil can be represented by the equations below;

After reading this article, one might wonder about where those algebraic equations came from. Those equations are the reason why the airfoil series are called NACA airfoils. Researchers at NACA after empirical studies came up with these algebraic equations. These are the equations that revolutionized the field of aerospace and aerodynamics. If you are interested to know how the equations were developed I recommend you to check out the research paper entitled The Characteristics of 78 Related Airfoil Sections from Tests in the Variable Density Wind Tunnel, NACA Report #460, by Jacobs, Ward, and Pinkerton, 1932.

Do you want to learn how to plot NACA 4-digit airfoil using MATLAB? If yes, check out this post: https://www.geniuserc.com/plotting-naca-4-digit-airfoil-using-matlab/

Also check out this Wikipedia link to know more about NACA Airfoils https://en.wikipedia.org/wiki/NACA_airfoil.